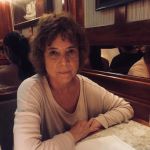 “She still talks in her sleep,” says Ronit.

Rivkie Fried was born in Israel, raised in Tel Aviv and New York, and has lived in England for many years.  As a journalist she covered the Middle East for Reuters News Agency and for radio, both in occupied Syria and Lebanon. She has published stories in American and British magazines, including Story Quarterly, Stand, and The Massachusetts Review. This extract is taken from her novel, The Wrong Sea. It tells the story of an Israeli family coming to terms with the death of its eldest son, a helicopter pilot shot down over Lebanon.