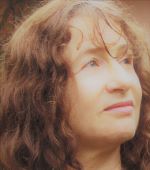 Avital Gad-Cykman is the author of Light Reflection Over Blues and of Life In, Life Out (Matter Press). She is the winner of the Margaret Atwood Studies Magazine Prize and The Hawthorne Citation Short Story Contest, twice a finalist for the Iowa Fiction Award, and a six-time nominee for the Pushcart Prize. Her stories have appeared in The Dr. Eckleburg Review, Iron Horse, Prairie Schooner, Ambit, McSweeney’s Quarterly, and Glimmer Train, and anthologized in W.W. Norton’s Flash Fiction International anthology, Best Short Fictions, and elsewhere. Her PhD in English Literature focuses on minorities, gender, and trauma. She grew up in Israel and lives in Brazil.