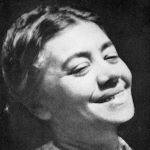 Translated from Yiddish by Anita Norich

Tsilye Dropkin (the author) (1887-1956) was an acclaimed poet, prose writer, and painter. Born in White Russia, she came to the U.S. in 1912 and, with the exception of the years during the Great Depression, spent the rest of her life in New York. Dropkin began writing poetry in Russian, but by 1920 she was writing in Yiddish. Her work is often heralded for its frank exploration of the relationships between people and their erotic and emotional lives and passions. Only one book of her poetry appeared in her lifetime (In heysn vint / In the hot wind), but she also wrote a novel serialized in the Forverts in 1934 (Tsvey gefiln /  Two feelings) and ten short stories that appeared in Tsukunft in the 1930s, including “The Factory.”

Anita Norich (the translator) is Collegiate Professor Emerita of English and Judaic Studies at the University of Michigan and is currently serving as Academic Advisor to the Center for Jewish History Fellowship Program.  She is the translator of Two Feelings by Tsilye Dropkin (forthcoming 2023), Fear and Other Stories by Chana Blankshteyn (2022) and A Jewish Refugee in New York by Kadya Molodovsky (2019). She is also the author of Writing in Tongues: Yiddish Translation in the 20th Century; Discovering Exile: Yiddish and Jewish American Literature in America During the Holocaust; and The Homeless Imagination in the Fiction of Israel Joshua Singer.  She translates Yiddish literature and lectures and publishes on a range of topics concerning modern Jewish cultures, Yiddish language and literature, Jewish American literature, and Holocaust literature.