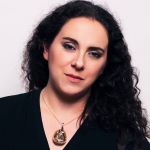 Mayan Rogel (the author) is an author, screenwriter, immersive storyteller, writing teacher and narrative consultant. She lives in Tel Aviv with her wife and our daughter. To date she has published five books in different genres. She lives and breathes stories, as a writer and as a reader. Surrounded by stories, she writes those which haunt her the most.

Yaron Regev (the translator) is an author and translator. He is the author of two graphic novels, Ghosts of Love and Country (2019) and The Cave (2022), as well as an upcoming YA fantasy series called The Door Behind the Sun, the short play Until the Children Will Return, and several adult novels.