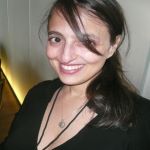 Tatia Rosenthal is a multi-award-winning filmmaker and animator. She's directed and co-written $9.99, a feature film based on Israeli writer Etgar Keret's short stories. Her second feature film collaboration, Five and a Half Love Stories, is currently being filmed in Lithuania by Director/Co-writer Tomas Vengris. Issachar is her first published story.