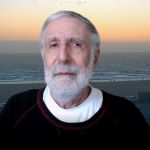 Gabriel Lampert is a retired adjunct professor of mathematics, now residing in San Francisco. He lived and worked for 40 years in the New Mexico desert, and is hoping he has found his Promised Land. He has had about a dozen short stories and essays published in small magazines, most notably in the University of Edinburgh Informatics Department's celebration of the Alan Turing centenary. The rock mentioned in this story is quite real, and he has visited it twice. The writing on it propelled him to figure out who must have carved it and why, so this story is one suggestion not previously published.