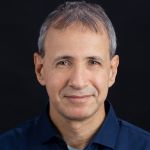 Translated from Hebrew by Sondra Silverston

Eldad Cohen was born and grew up in Jerusalem. He has an MA in clinical psychology from Tel Aviv University and he lives and works as a psychologist in Tel Aviv. His military service as a combat soldier (1983-86) deeply affected him and found its way into some of his short stories. Cohen has written three plays, three books of adult fiction, and one book for children. His play Repertory Theatre (2012) received awards in major theatre festivals all over the world, including the Edinburgh Fringe, and Cohen won Playwright of the Year at the Israeli Fringe Theatre Golden Hedgehog Awards (2013). Other awards include: Ministry of Culture Prize for debut works for Look  At Me (1998); Best Play and Best Playwright, International Festival of Plays for children in Haifa for Summer Holiday (2004). Wake Up, Mom is Cohen’s first novel. Published in 2019, it became an immediate bestseller. It was selected as one of the recommended books of the year by the Ministry of Education, and has been adapted for the stage by Cohen and Dori Parnes.