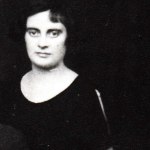 Translated from Yiddish by Sonia Gollance

Anne (Hannah) Viderman (the author) (1899-1994) was born in the town of Oushitza in Podolia (now Stara Ushytsya, Ukraine), fled Russia with her family during the Revolution, moved to Bessarabia and Romania with her husband, and immigrated to Montreal, Canada in 1924. She published regularly in Der Keneder odler (The Canadian Eagle), Canada’s leading Yiddish newspaper. She also published two collections of short stories, humorous sketches, and memoirs: Umetiker shmeykhl (Sad Smile) (1946) and Alte heym un kinder yorn (Old Home and Childhood, 1960). Two of her autobiographical articles from Umetiker shmeykhl were published in English translation as “A Fiddle” in the 2007 anthology, Arguing with the Storm: Stories by Yiddish Women Writers.

Dr. Sonia Gollance (the translator) is Lecturer in Yiddish at University College London and author of It Could Lead to Dancing: Mixed-Sex Dancing and Jewish Modernity (Stanford University Press, 2021). A 2020-21 Yiddish Book Center Translation Fellow, her translations have appeared in In geveb: A Journal of Yiddish Studies and the Language, Literature & Culture section of the Yiddish Book Center’s website.