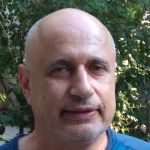 Davidy Rosenfeld (the author) lives in Ra’anana, Israel with his wife, three children, and a clumsy cat. He graduated from Tel Aviv University with a BA in Eastern Philosophy and an MA in History and Philosophy of Ideas and Science, with honors. He is a teacher for at-risk high school students. His books, Farewell My Babylon and The Dreams That Killed Us are private detective novels and have received excellent critical reviews, while his children’s picture book, The Rabbit Who Wanted to be a Tree, won the Ministry of Education Prize.

Yaron Regev (the translator) is an author and translator. He is the author of two graphic novels, the 2019 published Ghosts of Love and Country, the soon to be released Descartes’ World, an upcoming YA fantasy series called The Door Behind the Sun, the short play Until the Children Will Return, and several adult novels.