A Wife Pawned and Sold 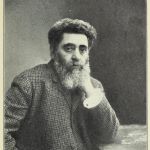 A Wife Pawned and Sold

Translated from Yiddish by Ruth Murphy

But it was not destined for him to suffer the loss of that money. Sheyne Khane and her children were no longer there. They had left that morning for Pennsylvania.

Jacob (Yiddish: Yankev) Michailovitch Gordin (the author) (1853 – 1909) was a prominent Yiddish playwright credited with ushering in the “Golden Age” of Yiddish theater in the United States, elevating the Yiddish stage by introducing themes based on realism and naturalism. In addition to his own creations, many of his works were either based on, or adaptations of, plays by Shakespeare, Ibsen, Hugo, and Gogol. Gordin’s plays were realistic works that his audiences, primarily Yiddish-speaking Jews who were either immigrants themselves or first-generation Americans, could easily identify with. Some of his best known works include Der yidisher kenig lir (“The Jewish King Lear”based on Shakespeare’s King Lear ), Mirele Efros, Got, Mentsh un Tayvl (“God, Man, and Devil,”  based on Goethe's Faust), and Di Kreytser sonata (“The Kreutzer Sonata”).

Ruth Murphy (the translator)'s translations have appeared in the Jewish Review of Books, Metamorphoses, Pakn Treger, and the Yiddish in Translation section of the Yiddish Book Center's website. Her bilingual Yiddish-English text, The Canvas and Other Stories by Salomea Perl, was published by Ben Yehuda Press in 2021. Upcoming works include a bilingual translation of Hersh Smoliar’s Yidn on gele lates (“Jews without Yellow Patches”) and further works by Jacob Gordin and I. M. Dik.