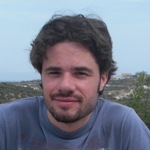 Tom Zimmerman is in a foul mood. It is the hottest day of the year in Tel Aviv, 44ºC in August, and he is running 33 minutes late for work, thanks to the batteries running out on his alarm clock which caused him to miss his usual bus. Tom, already swimming in his own sweat, considers taking a taxi to the office but looks into his wallet to find that he has less than five shekels left. The nearest ATM machine is a 10-minute walk away, so Tom weighs up the pros and cons and decides to wait for the next bus which is 21½ minutes late. There is no seating room on the bus: it is filled with soldiers, students and dwarflike old women. Tom pulls out his MP3 player and switches it onto “shuffle” mode. He listens to some early 1990’s techno, a song from The Beatles’ Revolver and a reggae tune called “Young Tree.” For 24 precious minutes he forgets that he is now one hour late for work on the day of an important conference call to New York.

Dan Savery Raz is the co-author of the Lonely Planet Israel & Best in Travel 2011. Originally from England, Dan now lives in Tel Aviv with his wife, where he shuffles his time between writing, listening to music and walking his dog, Boots. Dan has written articles on travel, socio-economic issues and education for a range of publications including HaAretz, Time Out, The Forward, easyJet Traveller and The Jerusalem Report. He has an MA in Creative Writing from Bar Ilan University and his poetry has been published in Private Photo Review, Cyclamens & Swords and Mediterranean.nu. In 2009, Dan founded a poetry & music collective in Tel Aviv and is currently editing an anthology to support African refugees entitled The Last Stanza. For more see: www.danscribe.com