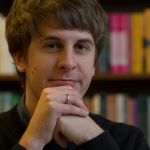 Translated from Hungarian by Walter Burgess and Marietta Morry

Walter Burgess and Marietta Morry (the translators)are both Canadian; they translate fiction from Hungarian. The translation of the two Moesko stories published in Canada was done by them.  They have, in addition to these stories, translated fiction by Gábor T. Szántó, several short stories (four of which have appeared and another which will soon come out), and a novel, Europa Symphony. Their current project is a novel by Zsófia Czakó. Marietta Morry and Lynda Muir have translated the memoirs, As the Lilacs Bloomed, 2014 (which won the 2015 John Glassco Prize of the Literary Translators’ Association of Canada) and In the Hour of Fate and Danger, 2020, both published by the Azrieli Foundation.