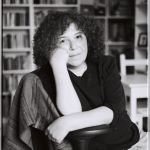 Translated from Czech by David Livingstone

Irena Dousková is a novelist, poet, playwright, and screenwriter. At home and abroad, she is best known for her tragicomic trilogy: B. Proudew (translated by Melvyn Clarke, Pálava Publishing, 2016), Oněgin Was a Rusky (translated by Melvyn Clarke, Pálava Publishing, 2018), and Darda (as yet untranslated into English). She is the author of ten books of fiction, and more than 100,000 copies of her books have been sold in the Czech Republic alone. Her books have appeared (or are due to appear) in 15 languages. Irena Dousková was born in 1964 in Příbram. She graduated from the Faculty of Law at Charles University, but never entered the legal profession. She has worked for the most part as a journalist, as well as a librarian and a dramaturge at a cultural centre. Since 2006 she has made a living from writing books, dramas and filmscripts. She lives in Prague. More about the author and her books: https://www.dbagency.cz/index.php?pg=authors&id=3

David Livingstone (the translator) is an American citizen living and working in the Czech Republic for the last thirty years. He teaches English literature, amongst other things, at Palacký University in the city of Olomouc. He also translates both fiction and non-fiction from Czech to English.