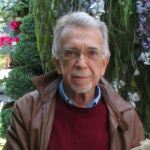 Eli (rhymes with deli) Greenbaum is a lawyer/freelance writer. He was born in Tel Aviv and immigrated with his family to the United States when he was five. He has authored several books (nonfiction), short stories, and essays. He taught advertising and marketing at Wayne State University, Michigan State University, and the College for Creative Studies (Detroit). His love of books, libraries, and community earned him an elected position on the Bloomfield Township Public Library board of trustees. Eli’s muse and toughest critic is his wife Barbara Bloom, a freelance writer/editor. They live in Vancouver, B.C.