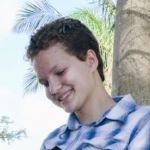 And the Protector is no more.

Katherine Berlatsky is a 19-year-old junior at Vanderbilt University, majoring in English (Creative Writing) and minoring in Spanish. She is from South Florida, and spends most of her free time writing and playing Dungeons & Dragons. This is her first publication.