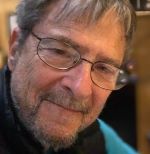 Henry Alan Paper's stories have been published in The Sun, New Phase, Scottish Life, and Portland Monthly Magazine, Kerem, Response, Jewish Currents, and Webdelsol. He often reads his stories in New Haven and has been featured numerous times on Connecticut Public Radio. He lives in Hamden, CT, with his wife and two daughters – by far the best Papers he's produced.