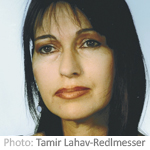 Translated from Hebrew by Dalya Bilu

Mira Magen was born in Kfar Saba, Israel, in 1950 to an Orthodox family. She studied psychology and sociology before turning to nursing. She worked as a nurse at Hadassah Hospital in Jerusalem and started publishing short stories in the early 1990s. Magen has published a number of bestselling novels and a book of short stories. She has been awarded the Olschwung Foundation Award (1988), the Prime Minister's Prize (2005) and the Book Publishers Association's Gold Book Prize five times (2001; 2004; 2005; 2011; 2012).