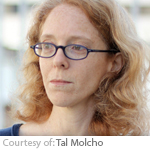 Translated from Hebrew by Daniella Zamir

It felt as though she were rushing to gather precious information, all before the old man turned on his heels and disappeared back to the distant land of which he had temporarily taken leave.

Excerpt from the novel The Old Man - Farewell, first published in Hebrew in Israel 2018 by Hakibbutz Hameuchad Ltd.
Copyright © 2018 Noga Albalach. English translation © Noga Albalach
Published by arrangement with The Institute for The Translation of Hebrew Literature

Noga Albalach was born in Petah Tikva, Israel, in 1971 and now lives in Tel Aviv. She received an MA in economics from Tel Aviv University and worked for several years as an equity analyst. In 2005, she left this field and started studying literature. She received her MA in literature from Tel Aviv University and at present she works as literary editor. Albalach has published a novel, collections of short stories and novellas as well as books for children. She has been awarded the Ministry of Culture Prize for Debut Literature (2011)ת the Prime Minister's Prize (2016) and the Brenner prize for "The Old Man" (2018).