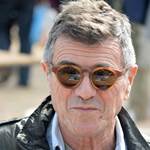 Guillermo Saccomanno (the author) was born in Buenos Aires in 1948. Before becoming a novelist, worked as a copy writer in the advertising industry and as a script writer for cartoons and other films. A prolific writer, Saccomanno has won many literary awards, including the Premio Nacional de Literatura, Seix Barral’s Premio Biblioteca Breve de Novela, the Rodolfo Walsh Prize for non-fiction, and two Dashiell Hammett Prizes. Gesell Dome, the first of his works to be published in English (Open Letter 2016), was followed by 77 (Open Letter 2019). Forthcoming from Open Letter Books this year is a third Saccomanno novel, The Clerk.