Each and Every Child 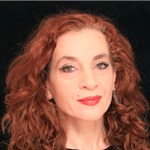 Each and Every Child

Translated from Hebrew by Galia Vurgan

Can you send another photo?
Ok, one sec
…
Hot!
Great lips
Thanks

You have a full body pic, maybe?
Clothes on is fine :)
Don’t have one…
But I can describe
Awesome. Start with the tits
Hmm
Normal
Perfect
Don’t think I can handle abnormal :)

Go on…
(she grabs the bag lying on the floor and takes her mobile out.)
Light skin
Short hair
Thin
Not very tall
Petite, in general
!!
What?
You prefer them XL?
(She checks the time on her mobile, turns the alarm on and chokes back a yawn, as if he can see her.)
No no
French. I love it
You speak it?
A little
Will you speak to me?
I mean, French
I mean, in bed
Maybe
Anything else?
Hmm
I like going down
No problem with that

Nice of you. Again :)
Will you sit on me too?
Why not
Anything special U wanna have?
I’ll let you find out for yourself
Deal
Just one thing
Yeah?
I meet on Tuesdays only, noon time
Your place
Cool
I’ll get to see the normal tits in daylight

So can I have your number Eleanor?
Just give me yours, I’ll call
*
It turned out later that the raging storm only came around to clear out the endless summer, and a warm, lenient fall followed. And at the end of this soft season war broke out, like the sick spasm of a degenerate body, unable to do any good but still capable of evil and destruction. The onset was not incidental. There were those who decided on it, and those who supported it, and those who carried it out, and those who kept silent about it. There was even a slogan, some biblical war name with a touch of fall. They were bombed, we were shelled, missiles reached far and wide. A few were killed here, dozens there. Noam explained to Eli that angels were playing war games with devils, or maybe it was witches with dwarves, whatever he had heard in kindergarten combined with his own interpretations. Eli tightened her lips and waited for it to be over. In the small office she shared with the editor of the cooking section, she forced herself to watch slaughtered children on her browser every morning. Their blood-soaked clothes, their frozen, glazed eyes, the eyes of their mothers, the timid smile of a green-eyed young girl, her hair gathered into two tight little ponytails, next to the photograph of someone leaning over that same girl’s burnt body. Then she would cut and revise and rewrite pieces about a special stand-up event and a comedy festival, embedding as many visuals as possible, feeling that these slick, deceitful articles were spraying cheap perfume over the stinking corpses. Every siren evoked a wave of helpless wrath within her, and an urgent need to run to the kindergarten, and in the afternoon she would indeed run there, quite frantically, and grasp Noam to her while his face became one with the glowing round face of the timidly smiling girl in the photograph. After seven days it was all over. Ordinary life took over instantly, like water swept aside and quickly slithering back, with artless, indifferent persistence. Till the next round, Alex thought.
*
Like every Wednesday, at the end of school, Amit Danon, the eleventh grade homeroom teacher, parked her small car two or three blocks away and made her way on foot, through the cold wind, towards the building. As always, she couldn’t resist the urge to shoot a quick glance upstairs, although it was impossible to see anything through the window, and couldn’t hold back the hasty ascent up the stairs, after which she would gasp and try to catch her breath in front of the door. The moment of entrance was always awkward: she had to squeeze in while he closed the door behind her, and then put down her bag and turn to hug him. After that she let him take off her coat and they exchanged a few words on their way to the bedroom, where he removed the rest of her clothes. They were very efficient using their limited time, but made sure they avoided the dry practicality that would have insulted them both, and learned to ride the waves of affection and gratitude. The noon air was clear and crisp beyond the closed bedroom shutters, the wind flew wild around the building, and she shivered when the cool sheets touched her skin. His strokes, at first meant to warm her, soon aroused them both and, eyes shut, she followed the progress of his lips down her shoulders, breasts and belly, feeling her blood swirl and her body tenderly give way. She was a tall, stout woman, and her body formed an effortless friendship with his right from the very beginning. Over a year had passed and they were now both racing skillfully to the peak of pleasure. Sometimes, like on that Wednesday, she even had to restrain it a little, to delay the convulsion, before she finally let go and the tremor swept over them both, for a minute pushing them even closer to each other, and then loosening up. She remained engulfed in this sweetness for a few more moments, her face buried in the hollow of his neck, till their double panting subsided. The light outside became slightly dim, foretelling the early winter darkness that would fall in less than two hours. The sounds of the world outside their shady capsule grew distinct once again: the rumble of a motorcycle, a dog barking persistently, the wind whistling. Everything she had pushed away – her two kids, the house, the troubles at school, the rest of the day’s chores – came crawling back into her mind. As did the fact that she refused to acknowledge for the time being: that she would have to give this all up one day, put this secret in a box and lock it away. She held out her lips and they kissed at length. Then there was another short kiss, followed by a fluttering farewell gesture, and she dressed almost as quickly as she had been undressed, and left.
A few minutes later Alex heard the thump on the door and the short mewing that sounded like a tweet. How come she never arrives when Amit is here? he wondered. Tearing himself reluctantly from the warm bed and the light scent Amit had left behind, he put on his clothes and went over to open the door. Sarah walked in haughtily, tail up, brushed against his leg and then rubbed against it once more, as if reassuring herself of her possession of him. Then she arched her back, and he bent over to stroke her, wondering if she thought he, too, was some kind of a big cat.

The novel that this is excerpted from was originally published in Hebrew in 2015 by Achuzat Bayit Books. The final 1½ pages of this excerpt were previously published in English translation in the Ilanot Review “Granta” issue in summer 2019 under the title, "The Vertigo of the Blood."

Tal Nitzan (the author) is an award winning poet, editor and a major translator of Hispanic literature. She has published seven poetry collections, one novel, and six children’s books. Her second novel is due out shortly. Among her awards are the Israeli Culture Minister's Prize for beginning poets and for a debut book, the Prime Minister’s Prize for writers, the Publishers’ Association Poetry Award, the Hebrew University and Bar-Ilan University Prizes for Poetry. A dozen selections of her poetry were published in several languages.

An ardent peace activist, Tal has edited the anthology With an Iron pen:  Hebrew poetry protesting the occupation, subsequently published in France and the U.S. Tal has translated circa eighty works in poetry and prose, mainly from Spanish, and has adapted a Hebrew version of Don Quixote and Shakespeare’s plays for youth. For her translations, she has won numerous awards, among them the Culture Minister Creation Prize for translators (twice) and an honorary medal from Chile’s president for her translation of Pablo Neruda. Tal is a founding editor at The Garage, the online literary magazine of the National Library of Israel.

Galia Vurgan (the translator) is a translator and editor living in Tel Aviv.