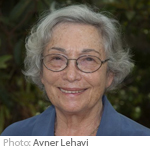 Yael Medini was born in 1930 in  Israel. She served in the army during the War of Independence and for a while lived on a kibbutz. She received a B.A. from Hunter College and an M.A. from New York University. Over the years she published  stories and novels for children, young adults and adults. Her novel  for young adults The Boy I Did Not Know won prizes from  Yad Va’shem and the Ministry of Education and Culture. She wrote the libretto for Oasis, an opera for children composed by Dr. Tsippi Fleischer, which was performed in Karlsruhe, Germany, and in Israel. She also wrote several radio dramas which were broadcast on Israeli radio. Some of her stories were published in English in the New York- based monthly Midstream and in Children of Israel, Children of Palestine published by Simon and Schuster.