The Labors of Leonard Vogel 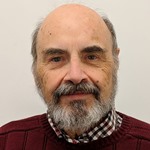 The Labors of Leonard Vogel

I have come after them and made repair
Where they have left not one stone on a stone . . .
– Robert Frost, “Mending Wall”

She ran her fingers through the small stones. Most of them were smooth, almost polished, having been retrieved from riverbanks, beaches, and the rims of tarns. Dressing quickly, she transferred the cache to a canvas tote bag and made her sandaled way along the dusty road toward the ancient burial ground.

Martin Itzkowitz works chiefly in short fiction and poetry. The latter has appeared in such publications as Moment, The Lyric, Barefoot Muse, TheHypertexts and the anthology When Memory Speaks: The Holocaust in Art. Brooklyn born and bred, a fact central to much of his writing, Martin is nevertheless a long-time resident of Philadelphia. He is Professor Emeritus at Rowan University where he taught in the Department of Writing Arts. As evidenced by the story here, Martin continues to write in retirement. He is currently engaged in revising The Days of Solomon Kahn, an annotated fictive journal purportedly kept by a Jewish immigrant to the United States during the first half of the twentieth century and translated from the Yiddish.