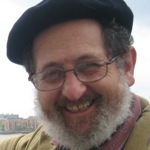 (Excerpt from a novel)

Rabbi Yehiel Grenimann, the eldest child of two Polish Holocaust survivors, is Director of Activities in the Occupied Palestinian Territories for Rabbis for Human Rights, an organization he has also served as Treasurer and Chairperson. After completing his MA in Holocaust Studies at the Hebrew University's Institute for Contemporary Jewry, he spent ten years in Holocaust education and was Director of the Ot Ve’Ed Institute in Jerusalem, where he focused on teaching teenagers, young adults and educators about Jewish resistance during World War II. Since receiving his rabbinical ordination from the Schechter Institute of Jewish Studies in 1991, he has worked as a rabbi and educator in the Masorti movement. Over the past 30 years he has been active in Peace Now, Netivot Shalom, and other peace-oriented groups. A long-time Jerusalem resident, he is married to Deborah Grenimann and is the father of four adult children.