Isaac Halevy, King of the Jews 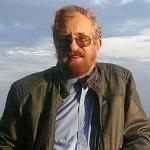 Isaac Halevy, King of the Jews

Translated from Spanish by Clark Zlotchew

Historical context for this excerpt:

The multitude kept moving along and when it seemed it had come to an end, new groups appeared, some exerting great self-discipline, others weeping and bawling loudly, some empty-handed, others with rows of carts filled with sumptuous luggage. Some were on foot, others on donkeys, and there were sheep, goats and even cows that went mooing along the main thoroughfare, and a cart bearing cages filled with hens. There was an old man dressed in black, carrying with visible strain a headstone, and a girl of Manuel’s age who looked at him with sad, black eyes. And there were fights every step of the way with people who lived in the houses and with the others crossing the road, and there was a woman sleeping in the doorway next to another who suckled a baby boy, and there was smoke from the braziers and cooking fires in the middle of the street.
At that moment, Manuel realized that his was the only open window on the entire street. He heard his father’s voice ordering him to close it, without giving any explanation, his face showing fear as though he had seen a ghost, but at the same time as though he had been expecting that ghost for a long time. His father refused to talk to him about those people, whom he continued to observe secretly from the rooftop, but he intuited there was something in common between the stealthy departure of the Halevy family and the uproar in the street.
Passing among the people, there were the drums and trumpets of the King’s soldiers, who stopped every once in a while to read from a long sheet of paper which they unrolled and then ritually rolled up again each time, while the people shouted at the wanderers and occasionally threw stones at them, and the soldiers threatened the crowd with their halberds, and there were intervals of silence between the bouts of yelling and the hoarse voice of the herald: “The harm caused to Christians following upon their dealings with Jews, who pride themselves on constantly attempting to subvert our holy Catholic faith with regard to faithful Christians.”And there was a deafening roar loaded with imprecations in different languages; a window was being opened on high and a serving girl hurled insults and water at the throng, and the detached voice of the herald: “And we know that the best way of precluding all this aforesaid harm and trouble consists of completely preventing aforesaid Jews from contact with Christians by expelling them from all our kingdoms and domains.”A soldier was stealing a mule from a woman and two adolescents were slashing away at each other with knives in the hallway of their house. “And we likewise give our permission to the aforesaid Jews and Jewesses to take their worldly goods and possessions from our kingdoms and domains by sea and by land, with the provision that said goods and possessions not be made of gold nor silver, nor include minted coin.”And his father, livid with rage, got him down from the roof joining words with slaps, while Manuel tried to find a cause that would allow him to understand his father’s anger and the meaning of that prohibition, which he intuited as being very close to him and his family but at the same time he could not grasp, perhaps because of that very proximity.

It was then that he remembered the expression on his father’s face several months before, when he forbade him to spy on his cousin Raquel when she was bathing. But he had managed to see something. Raquel was already a woman and had two breasts whose consistency surprised him when he touched them with his gaze. And his father’s expression was almost the same when he moved Manuel from the keyhole as when he made him climb down from the roof, so that he realized that in some mysterious manner the people in the street were naked while he and his family were clothed.

The original title of the novel from which this excerpt derives was Identidad, published by Editorial Sudamericana, 1980. But later editions used the title, Isaac Halevy, Rey de los Judíos (which means Isaac Halevy, King of the Jews), published by Tusquets; 1st edition (June 1, 2002).

Clark Zlotchew (the translator), Distinguished Teaching Professor of Spanish (Emeritus) at SUNY Fredonia, has had seventeen books published. Fourteen of them are in his field, but three of them are his own fiction: two thriller novels and the award-winning short story collection, Once Upon a Decade: Tales of the Fifties. His poetry and newer fiction have been published in literary journals based in the U.S., U.K., Australia, Canada and Ireland from 2016 through 2018.