The Deep End of the Pool 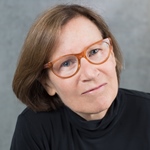 The Deep End of the Pool

After they parted, he went to the pool on the rue Pontoise. He began his workout. He lost himself in the rhythm of the arms and legs and the rhythm of the breath. At some point, he lost count of the number of laps he had done. At some point, he lost count of himself, becoming a fish in the water, agile and free. He swam as if there was no such thing as a lap, as if were no such thing as a shallow end or a deep end. No end at all. Only a blue sea.

Nancy Lefenfeld has, over the past two decades, conducted research on the subject of humanitarian resistance in France during the Shoah and has spoken and written extensively on the subject. A French translation of her work on the smuggling of Jewish children from France into Switzerland was published under the title Le Sort des Autres: Le sauvetage des enfants juifs à la frontière franco-suisse (L’Harmattan, 2016). She authored a chapter in Jewish Resistance Against the Nazis, edited by Patrick Henry (The Catholic University of America Press, 2014), and her articles have appeared in The Hidden Child and Prism: An Interdisciplinary Journal for Holocaust Educators. This is her first published work of fiction.