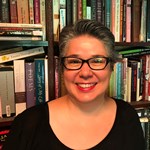 Sara Marchant received her Masters of Fine Arts in Creative Writing and Writing for the Performing Arts from the University of California, Riverside/Palm Desert. Her work has been published by The Manifest-Station, Every Writer’s Resource, Full Grown People, Brilliant Flash Fiction, The Coachella Review, East Jasmine Review and ROAR. Her non-fiction work is forthcoming in the anthology All the Women in my Family Sing. Her fiction is forthcoming in the anthology Running Wild. She is the prose editor for the literary magazine Writers Resist. She lives in the high desert of Southern California with her husband, two dogs, a goat, and five chickens.